Plant a tree in memory of Clarendon
An environmentally-friendly option 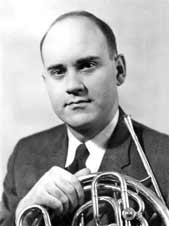 He was born August 23, 1930 at Cottage Hospital in Galesburg, Illinois, son of Clarendon Ess and Marion Valentine (Charles) Van Norman. He married Carol Emery in 1957, in New York City and later married Linda Barnes in 1978 at Amherst, in Nova Scotia, Canada.

Clarendon graduated from Galesburg High School in 1948 and studied at The Julliard School in New York City. He graduated in 1957 and later went on to obtain his Doctorate in Education from Columbia University, graduating in 1965. Clarendon was apart of the Buffalo Symphony Orchestra for 2 years as the Principal French Horn player and the Chicago Symphony Orchestra as a Principal French Horn player for another 2 years. He was also part of the Metropolitan Opera for 20 years as the Co-Principal and 8 years as the 3rd French Horn player, retiring in 1990. Clarendon was a member of the Long Island Antiquarian Book Dealers Association, Rotary International and the First Presbyterian Church in Levittown, New York, where he helped with various church committees. Clarendon was also an Antiquarian book dealer and enjoyed teaching the French Horn to others.

A private Graveside Service will be at Memorial Park Cemetery in Galesburg, Illinois. Memorial contributions may be made to a charity of one’s choice. Hinchliff-Pearson-West Funeral Directors and Cremation Services Galesburg Chapel is honored to serve the family. Online condolences may be made at www.h-p-w.com.

Plant a tree in memory of Clarendon by clicking here.
To send flowers to Clarendon's family, please visit our floral store.

A service summary is not available

Plant a tree in memory of Clarendon
An environmentally-friendly option

Plant a tree in memory of Clarendon

2 trees planted in memory of Clarendon

Love and caring wishes to Linda and May, thinking of you both. ❤️🌹

I’m honored to have sat in his chair these last 11 years. He was a giant, who inspired so many of us with the beauty of his artistry and the kindness of his heart. Rest In Peace.
Erik Ralske

A Memorial Tree was ordered in memory of Clarendon Van Norman by Erik Ralske.  Plant a Tree

The Knox-Galesburg Symphony Orchestra concert Jean Young mentions took place on February 13, 1966, according to the program in our family archives. Thank you for sharing that memory!
- May Van Norman (daughter)

I never actually met Clarendon in person but I celebrated my 18th birthday by having dinner with my family at the Hotel Custer and then attending a Galesburg Symphony concert at which Clarendon played Mozart French horn concertos. I played French horn and had memorized the music Clarendon played. What a great man! God bless him!

A Memorial Tree was planted for Clarendon Van Norman

Plant a tree in memory of Clarendon